In a placebo-controlled, randomised double blind study the healing process of three identical wounds of the oral mucosa in 30 patients was examined planimetrically, immunohistochemically and micromorphologically. One third of the wounds were irrigated without pressure every day using ozonised water (concentration 11-12 µg ozone/ml water), the next third using water, the last third remained without treatment. The application of ozonised water clearly showed an acceleration of wound healing within the first 48 hours, resulting in earlier epithelial wound closure after 7 days.

The relevant effects of ozone and their use in oromaxillary medicine have been subject to detailed study in the last years, the main question being if ozonised water could replace water disinfection in dental units (5, 6, 10). Practicability and toxicological aspects were also investigated (7, 9). Amongst the microbiological use of ozonised water, there often are suggestions of facilitation of wound healing in the literature (18, 20, 22). Under the influence of ozone improved rheological properties (1, 23), activated cellular metabolism (19), raised intracellular ATP-concentrations (14) and expression of cytokines relevant to healing, especially Transforming Growth Factor TGF-β1 (3) were observed. This study was designed to give some initial clinical experimental data on the effect of ozonised water on epithelial wound healing, given the fact that statistically substantiated investigations in this matter have not been established to this date. 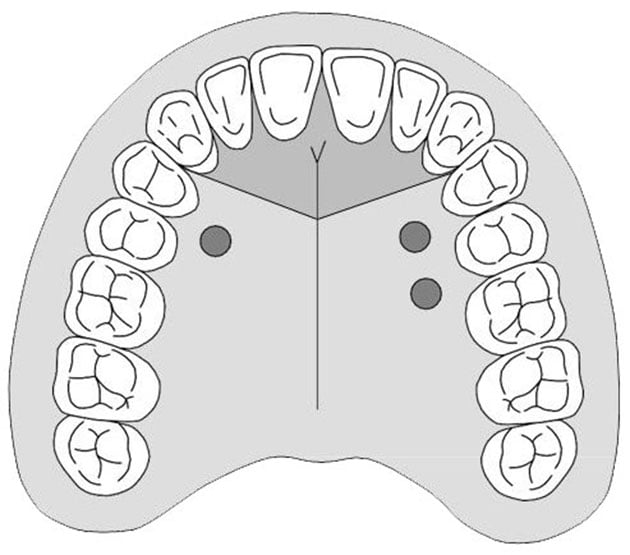 The three wounds in each test person were randomly treated as follows: One defect was rinsed with ozonised water (Cytozon, Hänsler, Iffezheim, Germany, concentration of ozone in water 11- 12 mg/ml), the second with water (Aqua ad iniectabilia, Braun, Melsungen, Germany) (control group 1) and the third wound remained untreated (control group 2). The treatment commenced immediately after surgery and was performed daily at the same time. After 2, 4 and 7 days the wound edges of all wounds were removed surgically (diameter 6 mm) in 10 of the 30 test  persons. The specimens were investigated histologically and immunohistochemically. During the whole investigation period the wounds were protected by a dental wound plate, which only was removed for treatment. Inclusion criteria were age (18 years ≤ x ≤ 35 years) and voluntary participation of all test persons in the study. Exclusion criteria were local or systemic immunodeficiency, acute infection in the head and neck region, previous surgical treatment of the palatal mucosa, coagulopathies, pregnancy, smoking or discontinuation by the test person. This study was approved by the Ethical Commission of the University of Giessen, Germany.

All defects were observed by plane geometry using an intraoral camera system. This was done immediately after surgery (initial surface), after two days and immediately before the secondary surgery on day 2, 4 or 7. A small plate with a diameter of 3 mm was placed adjacent to the wound as a reference. Any difference (and hence possible mistake in measurement) in camera- wound-distance or angle from one control to another could be mathematically compensated. A computer programme was used to measure wound size in pixels and definitive size was calculated using the pixel size of the reference.

Tissue from the wound edges was fixated and embedded. 5 mm thick slices were cut and placed  on a slide. One slice from the middle of the specimen was coloured with hematolxylin-eosine (HE), the following slices were used for immunohistochemical coloration. These were  established using the LSAB-technique (Labelled Streptavidine Biotine). A monoclonal antibody MIB-1 (Methylatione-Inhibited Binding Protein, Dianova, Hamburg, Germany) was used as a marker for proliferation. The MIB-1 marking rate in the first lot of specimens was established by counting all marked cells and all cells in mitosis on a base membrane length of 300 cells. The  line of cells being counted commenced on the border of the specimen. The marking rate in the second lot of specimens on the 2nd, 3rd and 7th day was carried out in the same manner except that the line of cells being counted commenced with the first marked cell near the border of the specimen.

The second lot of specimens that were excided (days 2, 4 and 7) was evaluated in view of the morphological progress of wound healing. Coverage of the wound surface by overgrowth of epithelial cells from the wound border was determined. In a second step the presence of mitosis in the newly formed epithelium was clarified, using the cellular markings already present.

This study was designed to be randomised, double-blind and placebo-controlled. The verification of structural identicalness of the initial wound surface and the cell marking rate was carried out using the Friedman-Rank variance analysis with dual measurement of one factor. The influence   of the treatment on the wound surface (planimetrical data) and number of marked cells (immunohistochemical data) on the three days 2, 4 and 7 was determined using a double-factor variance analysis with dual measurement of one factor. The determination of the healing progress within the first two postoperative days was established using a Friedman-Rank variance analysis and additionally an exclusion test (procedure for multiple comparisons, Nemenyi). The statistical evaluation of the micromorphological data was performed using the McNemar test.

Concerning the size of initial wound on day 0 (p=0.78) as well as the cell marking rate on day 0 (p=0.65), both groups could be regarded as structurally identical.

The descriptive evaluation of the wound surfaces was carried out using Box and Whisker plots, depending on the type of treatment and time of examination (Fig. 2). The statistical evaluation showed that the treatment used from the 2nd to 7th postoperative day had no influence on the reduction of wound surface (p=0.16). But, at the 2nd postoperative day the wounds treated with ozonised water proved to be smaller than those of the two control groups (p=0.02). 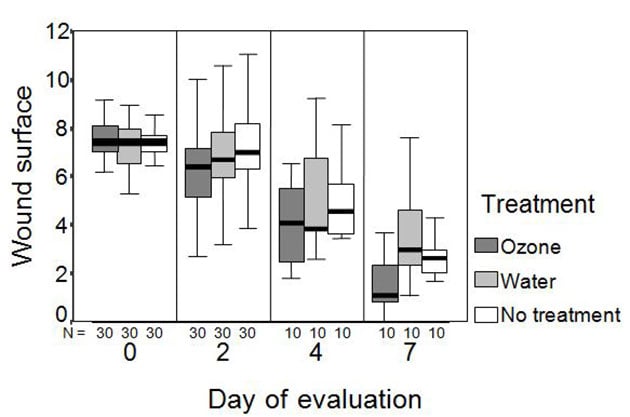 Fig. 2: Wound surfaces/mm² according to day of evaluation, type of treatment and number of evaluated wounds

The evaluation of the distribution of marked cells and cells in mitosis was also carried out using Box and Whisker plots (Fig. 3, 4). In some cases specimens from patients followed to the 4th postoperative days showed artefacts from fixation. This didn’t allow to include all patients in this group in the evaluation. Statistically there was a pronounced difference in the cell markings on  the first and second postoperative day (p=0.01). The treatment with ozonised water showed clear signs of difference what marking rate was concerned in comparison to water (p=0.04) and no treatment at all (p=0.08). The comparison of water and no treatment didn’t reveal any difference (p=0.97). 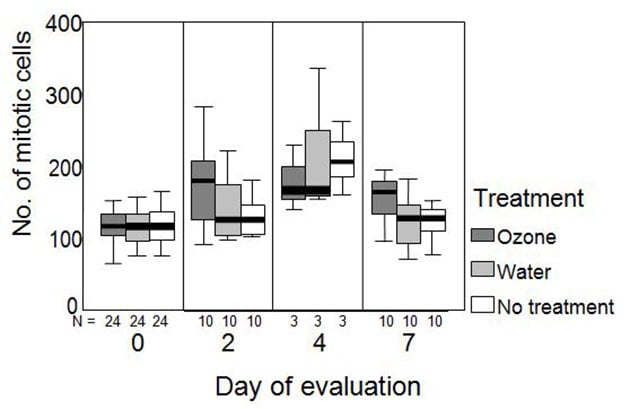 Fig. 3: Number of marked cells on a counting line in relation to day of evaluation, type of treatment and number of evaluated wounds 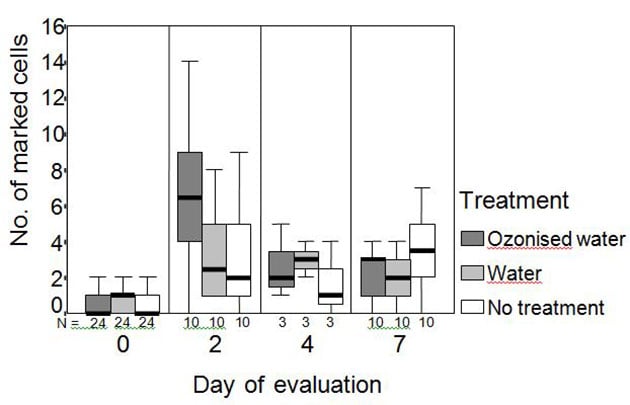 Fig. 4: Number of cells undergoing mitosis on a counting line in relation to day of evaluation, type of treatment and number of evaluated wounds

Ozonised water applied on a daily basis can accelerate the healing rate in oral mucosa. This could be seen in comparison with control groups on a planimetrical, immunohistochemical and micromorphological basis. The effect can be observed on the first two postoperative days.

Between the second and 7th postoperative day no further effect can be substantiated. The effect observed in the first 48 hours though, does modify the final wound closure: under the influence of ozone more wounds are closed after seven days and cell proliferation does commence earlier. The comparison with water, which is the basis of ozonised water, shows that the enhancement of closure is due to the ozone-oxygen mixture and not to the effect of irrigation or water alone. The comparison with wounds without treatment shows that daily treatment with ozonised water accelerates the physiological healing rate.

It remains unclear why ozonised water has this accelerating effect on wound healing. Diverse biological effects have been observed with application of ozone. The microbiological properties should be noted, these being clearly more accentuated in solution than in a dry ozone-air mixture (21). The wound receives more oxygen when ozonised water is applied. The modification of wound healing under application of oxygen is well known: the shortening of initial wound healing time, the enhancement of phagocitary activity defending cells, the accelerated migration of epithelial cells, the activation of fibroblasts and the importance for collagen synthesis are some important examples (11, 15). It should be noted that the influence of ozone leads to a higher expression of cytokines that are important for wound healing, especially TGF-β1 (3), an important substance for regulation and coordination in the initial wound healing phase.

TGF-β1 has a marked influence on cell proliferation, chemotaxis (monocytes and fibroblasts), angiogenesis, synthesis of extracellular matrix and collagen synthesis (4, 16, 170). Large studies performed in vitro and in vivo have showed that TGF-β1 leads to a pronounced acceleration of wound healing (2, 13, 16). One single application leads to clearly visible effects (12). This application though, must be performed immediately; 24 hours postoperatively the positive effect is completely lost (2).

Taking into account that results from animal experiments and experiments on other regions of the body cannot necessarily be applied on the oral mucosa, it may only be theoretically suggested that the effects of ozonised water mentioned in the literature are responsible for the its influence on the wound healing of the oral mucosa.

Ozonised water has found its place in the disinfection of dental units; it may be kept free or practically free of germs over a long period (5, 6). In anamnestically healthy patients, osteotomies of third molars using ozonised water for irrigation showed no difference in postoperative outcome in comparison with the use of sterile isotonic saline (8). Wounds with delayed healing were positively influenced by ozonised water (18).

This study was performed on anamnestically healthy patients. For more detailed information concerning the effect of ozonised water on intraoral wound healing, more studies will be necessary, especially with older patients and patients with known pathologies.

6. Filippi, A. “Ozone is the most effective disinfectant for dental treatment units: results after 8 years of comparison”, Ozone Sci Eng 19:527 (1997).