Critically ill patients that are submitted to the Intensive Care Unit (ICU), represent a challenge for the multidisciplinary teamwork. Because of the wide variety of physiological elements that are involved, a great quantity of death per year are present in the whole world.

In the United States for example, sepsis develops in more than 750 000 critically patients each year with only 50 to 70 % survival rate. Unfortunately, because of the high mortality rate associated with sepsis, there are in excess of 600 patients per day dying of sepsis-related complications in the United States alone (1).

Despite a long history of efforts to produce efficacious therapeutic interventions just like intensive medical care, antibiotic treatments and surgery when indicated, the condition remains a major cause of hospital-based mortality and morbidity (2-4). Several therapeutic strategies have been used in order to minimize this problem with variable results.

Ozone therapy is presented like an alternative therapy due to its different biological effects. Specifically: improvement in the oxygen metabolism, modulation in the biological oxidative stress and in the immunologic system (Figure 1) (5-9). 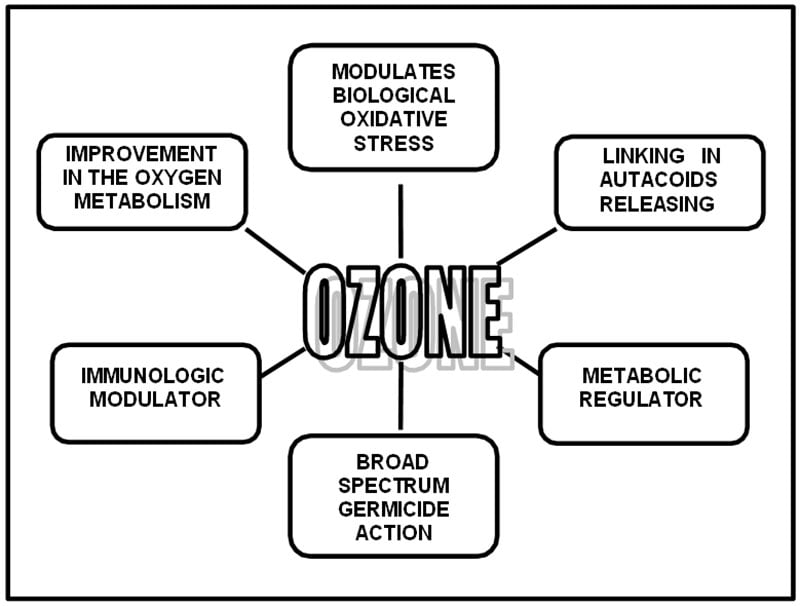 All the effects above mentioned are closely linked with the recovery and prognosis of critical patients. Taking into account all these aspects and also preliminary experiences (10,11), the results, using ozone therapy in a group of patients hospitalized in the ICU, are presented.

Patients and Treatment
A multicenter study in 20 patients hospitalized in the ICU was performed. Patients presented the following inclusion criteria: less than 65 years old, cranial and/or thoracic trauma, submitted to surgery or not, with mechanical ventilation or not, without humoral, radiologic or microbiologic evidence of clinical infection, without criteria of brain death.

Prophylactic ozone was administered, daily, by major autohemotherapy (200 ml of blood with anticoagulant mixture with 200 ml of ozone/oxygen, at a concentration of 45 mg/l) during 5 sessions. Prophylactic antibiotic therapy was not indicated.

Clinical laboratory test and radiologic studies were performed, daily, in each patient, during the first 5 days of evolution. To 13 patients that needed mechanical ventilation, hemodynamic determinations were performed using thermodilution with Swan Ganz catheter, before ozone therapy and after each hour up to 4 hours. This was repeated every day during the 5 days of ozone therapy.

From the 13 patients that needed ventilator support, 10 were weaning from the machine. The other 3 patients died, due to the magnitude of the cranial trauma (Table I).

After ozone therapy, an improvement in the hemodynamic parameters with an increase in tissue oxygenation were demonstrated. A shift of the HbO2/Hb balance to the right, towards deoxygenated hemoglobin, improving peripheral oxygen supply was observed. Also, an increase in hemoglobin saturation with high oxygen partial pressure figures and normalization of the difference alveolus-capillary oxygen (DA-a02) were found. No modifications in the cardiac output (CO) were reported (Figures 2, 3, 4 and 5). 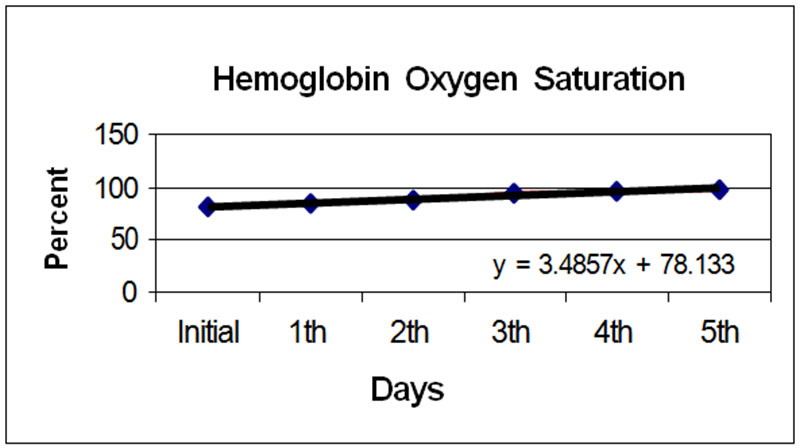 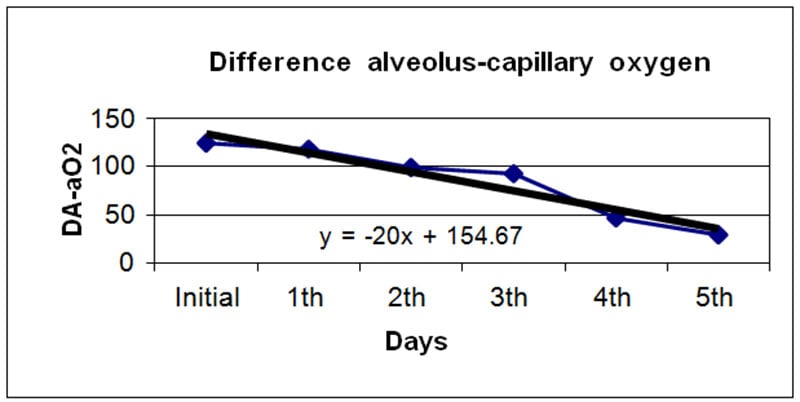 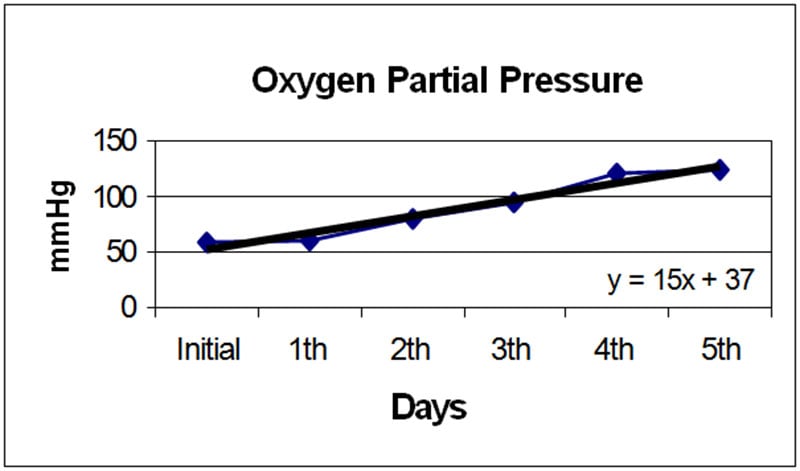 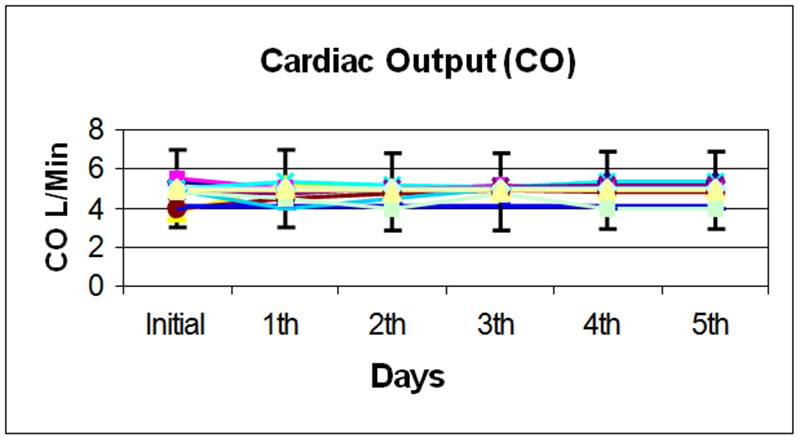 A modulating effect of ozone therapy in certain biochemical parameters, such as a decrease of the metabolic acidosis and a fast normalization in glucose figures in blood were achieved (See figures 6 and 7). 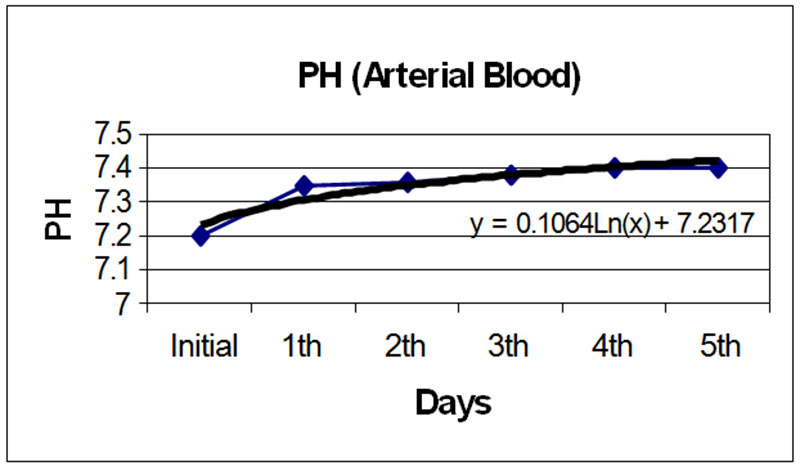 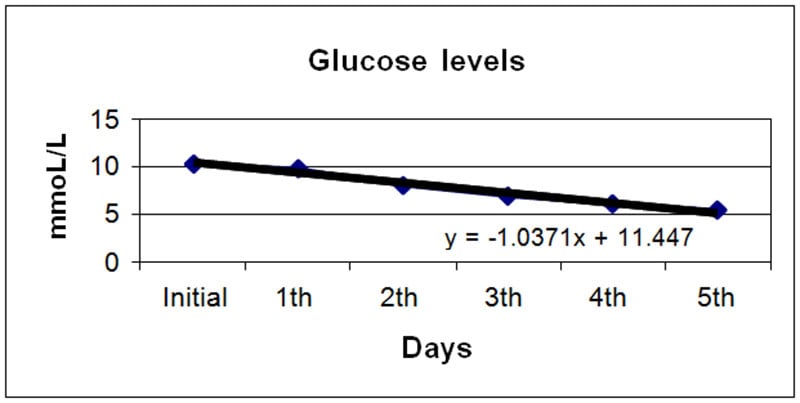 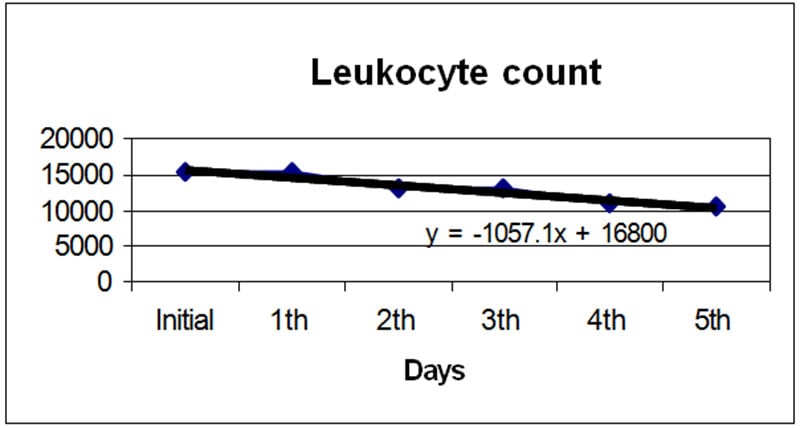 Taking into account radiologic studies, no significant incidence of lung sepsis was found and if it existed, it can be controlled without using second or third generation antibiotics. Finally an ozone therapy preventive effect in the appearance of generalized sepsis was observed.

No several reports were founded concerning to ozone therapy applied in critically ill patients. Our experiences are a new approach in the management of patients admitted in ICU and must be considered as a new tool in this field.

It was a relevant finding the improvement in the tissue oxygenation according to an increase in hemoglobin saturation, with high oxygen partial pressure and gradual normalization of the difference alveolus-capillary oxygen (DA-a02). This ozone effect has been reported in several papers (8,9).

No modifications in the cardiac output (CO) were founded in this study. Recently, some references report benefits about the hemodynamic stability of patients with severe sepsis (12). In the other hand, the no significant incidence of lung sepsis and the possibilities to handle with routine antibiotics allow to reduce the adverse reactions closely linked with their use (immuno-depression, infections by opportunistic microorganisms, renal failure, etc.). The widespread use of broad-spectrum antibiotics can increased the rates of both antibiotic resistance and nosocomial infections, and these have a direct impact on the incidence of sepsis. All those aspects cause severe complications and contribute to a bad prognosis during the recovery of many patients (13). It is well established (8,9) the great germicide power of ozone. Beside the disinfectant properties, ozone appears to stimulate the phagocytic activity of neutrophils and to modify immunoglobulin levels (9). Also, ozone at therapeutical doses, can act upon human peripheral blood mononuclear cells, as a mild cytokine´s inducer. The exclusive microenvironmental release of cytokines may have the advantage of activating suppressed immune cells with the stimulating phagocytosis, natural killer and other T.cell cytotoxic activities (8,9,14-16).

In the same way an adequate metabolic control, such as a decrease of the metabolic acidosis and a fast normalization in the glucose blood levels, are in correspondence with a good cellular statement. Lactate accumulation is associated with intracellular acidosis, an important cause of cellular injury, resulting in direct structural damage to cells and increased Ca2+ accumulation in tissue (17). It have been proved, in preclinical and clinical studies (5,7,18,19) that ozone oxidative preconditioning reduced lactate and uric formation and controlled the oxidative stress.