The group pretreated with ozone and antibiotics showed a significant increase in the survival rate and showed also a decrease of IL-1b mRNA expression in liver. Ozone pretreatment might prevent lethal peritonitis by controlling inflammatory process generated physiologically into the body against specific damage or specific organism.

Septic shock  is  the  commonest  cause  of  death  in  intensive  care  units. Shock resulting from a systemic response to serious infection, a syndrome usually termed “septic shock”, has been increasing since the 1930s (Finland M., 1970), and all stimates suggest that this rise will continue. There are approximately 500,000 cases each year in the United States (Wenzel et al., 1996) and about 75,000 cases in Germany. The reasons underlying this rapid increase and high incidence are many: increased use of cytotoxic and immunosuppressive drug therapies, increasing frequency of invasive devices, increasing longevity of patients prone to develop sepsis, and an increase in infection caused by antibiotics-resistant organism (Parrillo, 1989).

Therapy has emphasized early use of antibiotics, critical care monitoring, aggressive volume resuscitation, and, if shock continues, use of inotropic agents and vasopressors (Keith et al., 1980). Pharmacologic or immunologic antagonism of endotoxin or other mediators may prove to enhance survival in this highly lethat syndrome, But clear benefits of these new immunotherapies could not be demonstrated (Klosterhalfen et al., 1998)

Antibiotics appear to have little immediate effect on the course and outcome of septic shock, although they often rapidly inhibit or lyse the causative bacteria (or do both) and sterilize the bloodstream. This severe, acute toxicity that is unresponsive to antibiotic therapy is presumably due to systemic or circulating toxins and mediators (Danner et al., 1989). In fact, it has been hypothesized that the endotoxin of gram- negative bacteria may be released by the action of antibiotics, resulting in clinical deterioration (Healy et al., 1997 and Healy at al., 1996).

In recent decades, numerous experimental animal models septic shock were designed to study the underlying pathophysiological aspect of the disease and to find a new therapeutical strategy. Research focused both on hemodynamic alterations due to septic-shock-like states (Hinshaw and Beller, 1988) and on particular biochemical alterations.

Treatment with ozone may be effective in clinical use in defferent diss\orders, including ischemic conditions (Bocci, 1996) Recently, the effectiveness of ozone treatment in an experimental model of hepatotoxicity induced by CCL4 in rat has been reported (León et al., 1998) On the basis of the oxidant properties of ozone and on the possibility that specific cell sensor activated by lipid oxidation products (LOP) may downregulate the immune system.. We postulate that ozone  may induce a resistant to septic shock (inflammatory response).

The aim to evaluate the effect of ozone applied as prophylactic in combination with antibiotics on a relevant experimental model of peritonitis in rats.

Adult male Wistar rats (180-200g) were obtained from the National Center for Laboratory Animals Production, and used for this study. Rats were maintained in an air filtered and temperature conditioned (20-22 °C) room with a relative humidity of 50-52%. Animals were fed with standard commercial pellets and water ad libitum.

Ozone was generated by OZOMED equipment manufactured by the Ozone Research Center (Cuba) and was administrated by intraperitoneal route.

The following experimental groups were used:

The animals were taken at random and divided into 16 groups, 12 animals each other: Group A, positive control (sepsis without treatment).

The other groups (J-P) of animals were treated only with antibiotics with the same schedule like before group described but without ozone pretreatment.

Ozone pretreatment by intraperitoneal injection of a low concentration (10 mg/mL) and a volume of 80 mL/kg of body weight was administrated.

The peritonitis by a single intraperitoneal injection with fecal material (0,55g/kg) was induced. The fecal material from the cecal of a donor rats was diluted in Ringer solution 1: 1. The animals were observed during five days and the rate of mortality was measured. At five days the survival animals were sacrificed by lethal intracardial injection of T 61 Hoechst Roussel Vet, Germany); and all organs were macroscopically analyzed.

The animals from each group were sacrificed at 6 h after peritonitis induction and pieces from Liver, spleen, mesenteric lymph nodes and plaques Peyer were taken and frozen in Tissue –Tek (Embedding Medium for frozen tissue speciumens) Sakura. U.S.A until the determination of cytokines

Rats specific cDNA fragments for IL-1b, IL-2, IL-6 and TNFa were generated by reverse transcription PCR of total RNA from spleen of a LPS-stimulated rat or in case of IL-2 an animal stimulated with Staphylococcal enterotoxin A (SEA). The clonel cDNA fragments are the following: IL-1b cDNA is a 589 bp fragment ranging from bp 206 to 795 bp of IL-1b cRNA (Accession number M98820);

35S-labeled sense and antisense riboprobes were generated by in vitro-transcription using SP6 or T7 polymerases (Boehringer Mannhein, Germany) as appropriate in the presence of 35S-UTP (Amersham life Science, Germany). All labeled CRNAs were purified over Micro Bio-SpinÒ Chromatography

columns (Bio Rad, Germany) and diluted in hybridization buffer (100mM Tris pH 7.5, 600mM NaCL, imM EDTA, 0.5 mg/mL t-RNA, 0.1 mg/mL sonicated salmon sperm dNA, 1x Denhardt’s, 10% dextrane sulfate, 50% formamide) to 50.000 cpm/mL. Labeled cRNA was stored for no longer time than three weeks at – 75 °C. In situ hybridization was performed on 14 mm thick serial cryostat sections of rat spleen, liver, Peyer plaques and lymph nodes. Tissue sections were fixed in 4% paraformaldehyde in PBS at 4 °C for 1h, washed 3 times in PBS, penetrated by 0.4 % Triton X-100 in PBS for 5 min. and acetylated for 10 min. in 0.1M triethanolamine pH 8.0 with 0.25 % acetic anhydride. Tissues were washed in 2x SSC, Dehydrated in ethanol and stored at – 20 °C until hybridization. Hybridization with cRNA, prepared by in vitro transcription. The incubation of 35 m L of cRNA on tissue sections for 16-18 h at 56°C in a moist chamber was performed. The slides in 2x SSC and 1x SSC for 10 min were washed and single stranded RNA was digested by 10 mg/mL RNAse, 1U/ml T1 RNAse Boehriger Mannheim in Tris/EDTA pH 8.0, 150 mM NaCL for 1h at 37°C. Afterwards, slides were desalted by passing them though 1x SSC, 0.5x SSC, 0.2x SSC for 10 min. And washed in 0.2x SSC at 60°C for 1h. Then the tissue sections were washed in H2O for 10 min., dehydrated by ethanol and became airdried. Autoradiograms were taken by exposing the sections to an autoradiography film (Hyperfilm-bmax, Amersham, Dreieich, Germany) for 1-3 days.

Survivals in animals pretreated with ozone and antibiotics

Groups pretreated with ozone and antibiotics in combination showed a significant increase of survival in comparison with the groups treated only with antibiotics.

Graf.I Rate of survival in rats pretreated with ozone plus antibiotics and 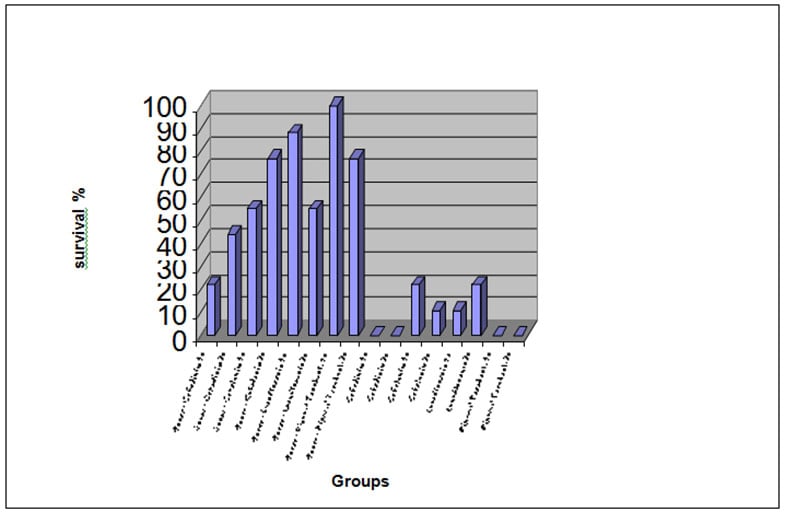 The microorganisms have developed resistance to antibiotics, so that in the pharmaceutical field new germicidal products such as cephalosporine and quinolones are being continuosly developed. In this study is demonstrated that ozone applied prophylactically was able to increase or support the antibiotics action

Antibiotics appear to have little immediate effect on the course and outcome of septic shock, although they often rapidly inhibit or lyse the causative bacteria (or do both) and sterilize the bloodstream. This severe, acute toxicity that is unresponsive to antibiotic therapy is presumably due to systemic or circulating toxins and mediators (Danner et al., 1989). In fact, it has been hypothesized that the endotoxins of gram-negative bacteria may be released by action of antibiotics, resulting in clinical detrimental (Shenep et al., 1984).

b-lactamis with respect to their release of endotoxin and production of TNF a and IL-6 during treatment using an experimental model  of  E.  coli  peritonitis  in  rats. Healy et al., 1997 has demonstrated that antibiotics such as Tazobac ,Ceftazidime, Imipenem, Ciprofloxaciny Gentamicin are capable to increased endotoxin released and IL-6 production but it depend on the antibiotics doses and the organism bacterial.

According to these results we could suggest one of the mechanism by which ozone pretreatment could potency the antibiotics action in ours peritonitis model compared with the survival of the group treated with antibiotics alone. Firstly the antibiotics increased the endotoxin release and one of the proinflammatory cytokine (IL-6) so that the animals treated only with antibiotics and specifically Tazobac had 0% of survival unliked the animals pretreated with ozone getting 100% of survival. The ozone might act as an inhibitor of the release of this kind of cytokines.

a was detectable in serum, spleen, liver and lung during the first 4h, with a peak 2h after cecal ligation and punction (CLP). IL-6 levels increased significantly in serum throughout the first 16 h after CLP and IL-1β was measurable in serum after 24 h, and levels increased significantly in spleen and liver 4 and 8 h after CLP (Villa et al., 1995). In this study the organs samples from the animals to determine cytokine expression were taken at 6h after induced peritonitis. This time coincides with the period of detection to IL-1β reported, so that, there it is showed only variability in the expression of IL-1β in liver.

We could postulate that ozone as oxidative agent produces a controlled oxidative stress by which is activated the protective intracellular mechanism and inhibits the most important proinflammatory cytokines (IL-1 b) in this case.

Ozone may to be applied in combination with antibiotics, it potentials the antibiotic’s activity. It is a very important result nowadays with the development of bacterial resistance to antibiotics. The prophylactic application of ozone may downregulate the inflammatory response and inhibits the IL-1 β expression in the liver.

17. Bocci V. “Ozonization of Blood for the therapy of viral diseases and Immunodeficiencies”. A hypothesis, Medical Hypotheses. 39:30-34 (1992).

22. Bocci V., “Ozone as a bioregulator. Pharmacology and toxicology of ozonetherapy today”, Journal of Biology Regulators and Homeostetic Agents, 10:31-53 (1996).