Preliminary individual selection of ozone concentration allowed us to carry out a more correct struggle against the disturbances of pro- and antioxidant systems in seriously burned patients.

Administration of active oxygen species (ozone therapy) intensified AOA (by 20- 35%), normalized LPO, EPR and activity of phagocytosis. Thus, for correction of free-radical oxidation processes in bum patients ozone therapy should be used associated with monitoring of its efficiency by means of biochemiluminescence methods.

The modem investigation into the mechanisms of development of pathochemical shifts in thermic trauma includes an evaluation of free-radical disturbances as one of the most important factors of bum disease pathogenesis which induces changes in cellular metabolism and thus affects all sides of metabolism. In this regard, we have to deal with the problem to study the mechanisms of correction of free-radical processes in case of body dysfunctions.

Two recent decades have demonstrated growing interest in using ozone for therapeutic purposes, there is more and more new information about its many-sided influence on the biochemical processes in human body, first  of all, free-radical oxidation processes (FRO). Ozone therapy has proved to be effective in correction of polyorganic insufficiency and has been successfully used in diseases of very different etiology. However, the use of this remedy in bum disease is limited to its local application as a rule. Parenteral administration of ozonated physiological saline can be beneficial thanks to many-sided influence of ozone on the metabolism. At the same time on the analysis of literature we have discovered practically no reports about influence of ozonated physiological saline on the homeostasis of bum patients.

The method of biochemiluminescence (BChL) was used in 55 bum patients (bum area over 20% of body surface, depth – II-IV degree) in order to determine the intensity of lipid peroxidation (LPO), antioxidant activity (AOA), erythrocyte peroxide resistance (EPR) and production of active oxygen species (AOS) in “respiratory explosion” of phagocytes. We evaluated also the level of diene conjugates and Schiff’s bases.

Medical ozone was produced by means of ozone generator MEDOZONS-BM. In order to individually select ozone concentration to be introduced by parenteral route to each concrete patient we used the following model: in vitro ozonation of the patient’s blood and follow-up determination of lipid peroxidation processes. For that purpose ozonated physiological saline with different saturation concentrations of ozone (1000, 2000, 3000, 5000 mcg/L) was introduced into the patient’s blood samples. In that way we modeled the conditions like in bloodstream during ozone therapy. The control blood sample contained the equal volume of physiological saline without ozone.

30 patients which underwent conventional treatment accepted in the specialized clinic for thermic affections were included into the group “Control”. The group “Ozone” contained 25 patients which along with the traditional treatment received ozone therapy. Ozonated physiological saline was introduced to the patients intravenously in volume 200 ml drop-by­ drop within 35 minutes. One ozone therapy session consisted of 10 treatments.

The chemiluminescence data indicated that in the initial period of bum toxemia the patients to be investigated showed significant intensification of lipid peroxidation processes in plasma that was 2,2 times higher than the standard (Fig. 1) as well as a sharp increase in the level of Schiff’s bases (Table I). That activity of oxidative reactions remained till the end of observation time. EPR credibly decreased by 50% as compared with the standard. On the 14th day after trauma the above index increased by 25% of the initial values and approached the upper limit of the standard (Fig. 2).

Table I: Dynamics of the level of LPO products in blood plasma depending on the method of treatment

* – credibility of differences in comparison with the initial level (p<0,05) 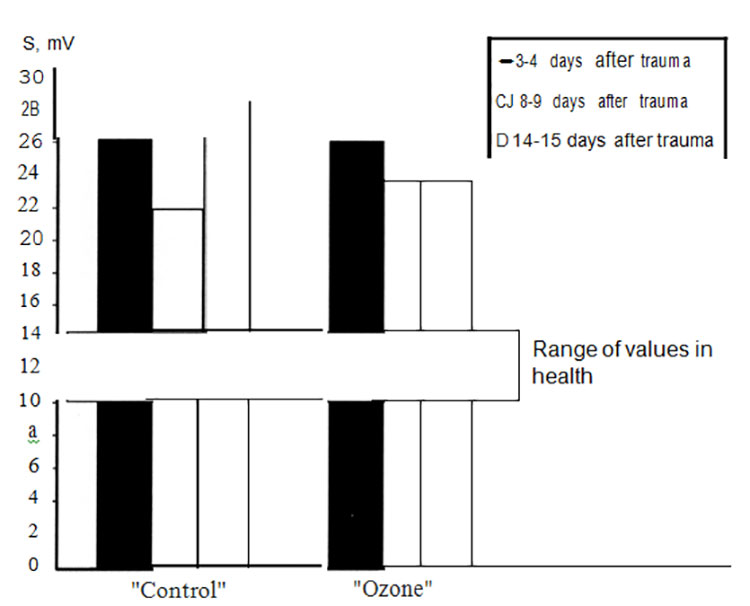 Fig.1. Dynamics of the intensity of chemiluminescence of blood plasma depending on the method of treatment (* – credibility of differences in comparison with the initial level, p<0,05). 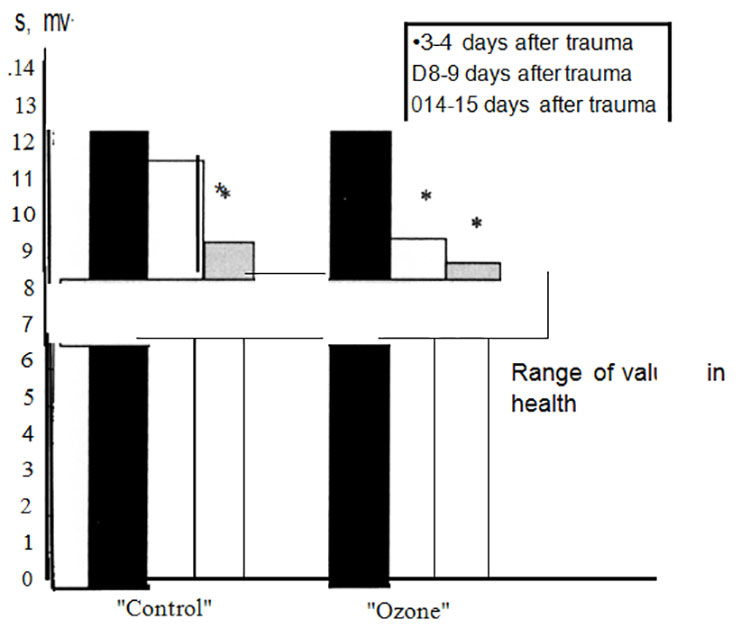 Fig. 2. Dynamics of EPR depending on the method of treatment (* – credibility of differences in comparison with the initial level , p<0,05).

The state of immunoreactivity in burned patients was evaluated according to the ability of phagocytes to produce the active species of oxygen. In the beginning of observation time the patients of control group showed a decrease in the phagocytic activity on average by 30% : lightsum indicating the intensity of free-radical reactions in phagocytosis ranged from 124,5 to 178,2 rel.units. Intensification of immune response on the 14th day of bum disease was observed only in half of the patients; moreover the level of active oxygen species of being produced exceeded the standard by 35% that indicated an expressed inflammatory reaction. The others showed a decrease in the biocidal activity of neutrophiles that made possible infection generalization (Table II).

Table II: Influence of ozone therapy on the generation of active oxygen species by neutrophiles

* – credibility of differences in comparison with the initial level (p<0,05)

The investigation into the total AOA of plasma showed a decrease in the index by 67,6% that was linked to the increased use of antioxidants for inactivation of free radicals . The AOA of plasma remained practically without changes during two first weeks of burn disease (Fig. 3). 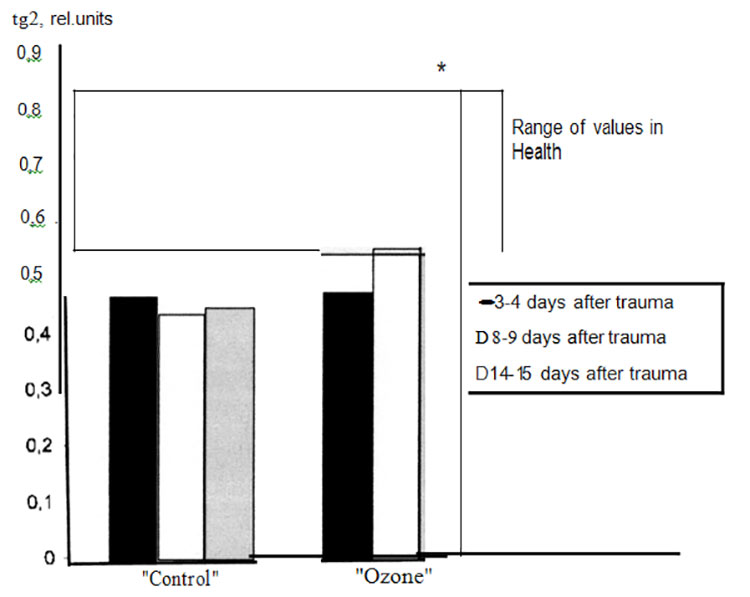 Fig. 3. Dynamics of the total AOA depending on the method of treatment (* – credibility of differences in comparison with the initial level, p<0,05).

The above mentioned was considered a precondition for further investigation into the possible correction of free-radical disturbances through the parenteral administration of ozonated physiological saline (OPS).

For effective and safe application of ozone therapy special attention should be drawn to selection of optimal ozone concentrations for treatment of burn patients which was conducted in vitro. Ozone as an active form of oxygen affects first of all free-radical oxidation processes in human body, thus for selection of appropriate ozone concentrations we based on the data about its influence on LPO and AOA.

The patients which received OPS showed an increase in lightsum of phagocytosis already at the middle of observation time which on the 14-15th day of burn disease reached the standard (Table II).

Preliminary individual selection of ozone concentrations allowed us to carry out a more correct struggle against the disturbances of pro- and antioxidant systems in seriously burned patients. For that purpose the conditions modeled in vitro were particularly applicable.

In our view the resulted decrease in the chemiluminescence of plasma and AOA can be explained as follows: in contrast to the previous concentration (3000 mcg/L), ozone saturation concentration 5000 mcg/L bubbled into the saline causes exhaustion of substrate for LPO and excessive consumption of antiradical reserve of serum antioxidants  in the closed system that is confirmed by the literature data about “sacrificial” nature of albumin which cannot be replenished  outside the body (Hallivel, 1988).

Moderate activation of LPO in the erythrocytes under the influence of low concentrations of ozone (1000-2000 mcg/L) bubbled into the saline can have a positive effect. Firstly, during ozonolysis the chains of PUFA split off and cell membrane becomes more elastic. Secondly, the molecules damaged through oxidation are eliminated from the membrane that in the end accelerates its regeneration (Belyanin, 1998). Finally, moderate activation of LPO must lead to a compensative increase in AOA in the erythrocytes.

The influence of OPS with ozone concentrations 3000 and 5000 mcg/L induced a more significant decrease in the peroxide resistance of erythrocyte membranes. It can be supposed that a considerable increase in AOA at (03] = 3000 mcg/L is linked with the release of antioxidants from the damaged erythrocytes. The released hemoglobin serves to suppress the biochemiluminescence. Probably, it contributes also to a decrease in the level of BChL in plasma under the influence of OPS with concentration (03] = 5000 mcg/L.

The above mentioned means that concentration [03] = 2000 mcg/L used in vitro appears to be optimal for regulation of dynamic balance between LPO and antioxidant defense system in bum patients. The results of experiments conducted in vitro can be used for verification of the selected ozone concentrations for intravenous administration of OPS to bum patients.

The use of OPS included into the complex treatment of bum disease facilitated significant intensification of AOA. However, the present material makes it obvious that the intensity of chemiluminescence does not correlate with the level of LPO (diene conjugates and Schiff s bases). The established data allow us to suppose that ozone initiates a peroxidation process. At the same time the alternative process of antioxidant synthesis takes place and results in the interruption of LPO chain. The insignificant decrease in BChL can be associated with a decrease in the substrate for LPO, previously oxidated in the course of free-radical reactions. We feel important to say that growth in AOA predominates over the increase in LPO products.

The use of ozone therapy facilitated the normalization of EPR. This effect can be realized through the mechanisms of structural changes in the protein-lipid membrane layer due to free­ radical oxidation reactions. The ozonolysis process can result in a decrease in hydroperoxides which decompose under the action of oxidant and considerably reduce the barrier properties of membranes (Govadze et al., 1990). It is quite possible that the increase in membrane resistance to LPO processes results from the activation of antioxidant defense mechanisms in the erythrocytes (Menendez, 1997; Bocci, 1997).

The established normalization of the level of lightsum of phagocytosis in the patients treated with ozone therapy can be explained as follows: active species of oxygen come into the body with OPS, besides; ozone stimulates free-radical reactions in the body that intensifies the biocidal activity of granulocytes. Thus, OPS plays a role of additional exogenous reserve of biocidal blood apparatus, moreover, the intensified generation of active oxygen species in comparison with the initial level on the background of the significant increase in  AOA indicates the normal and adequate reaction on the part of cell-bound immunity unlike the control group of patients.

Thus, activation of free-radical oxidation can be not only a disturbing factor, but also serves to provide a defense effect of adaption. The repeated external influences towards stimulation of LPO consolidate this effect and lead to an increase in adaption resistance.

The received results testify to the efficiency of parenteral ozone therapy method used in the treatment of burn patients.