Three mechanisms of action are discussed as underlying effects of the efficacy of Medical Ozone in the form of Major Auto Hemotherapy MAH and rectal insufflation following the low- dose-concept. The classical indications and the corresponding ozone effects are listed in table 1.

Table 1: The classical indications of low-dose medical ozone on the basis of the local (disinfection) and systemic mechanisms of action (Viebahn, Knoch 1995-2006)

Is there one common active mechanism underlying all the therapeutic successes of medical ozone?

In the classical indications for which medical ozone is systemically applied — i.e. angiopathias, particularly diabetic angiopathia, as supportive oncological medication, as ad- ditive therapy in chronic inflammatory diseases, for chronic forms of hepatitis as well as in age-related macular degeneration — a common pharmacodynamic basis for ozone in this application form has been under discussion for some time.

Apart from the well documented biochemical mechanisms – an improved availability of oxygen through activation of the erythrocytic metabolism (Hoffmann, Viebahn 2002; see also literature cited in situ) and endogenous cytokine production  by  activation  of immunocompetent cells (Bocci 1990 – 2005) – the bioregulatory effect whereby regulation of the cellular antioxidant systems is obtained has now revealed itself to be the decisive bio- chemical active mechanism of low-dosed ozone, and should now form the basis in our understanding the action and effects of ozone in its different indications.

Recently, it has been possible to classify ozone in the group of reactive oxygen compounds in the biological system; it is formed by neutrophils as a defence mechanism against infections in the presence of specific antibodies apart from hydrogen peroxide and superoxide radicals; its reaction is described as the water oxidation path in figure 1:

Due to the high but specific reactivity of ozone, immediate further reactions forming ozonides and peroxides of a non-radical character should occur. An excess of reactive oxygen com- pounds is controlled by a corresponding antioxidant system, see Figure 2.

Apart from white blood cells and macrophages, the mitochondria are the main source in producing reactive oxygen compounds or superoxide radicals; and oxidative phosphorylation in the respiratory chain, situated in the inner mitochondrial membrane supplying the principal amount of energy in the oxidation of glucose to CO2 and H2O, i.e. 36 ATP molecules out of a total 38, is the main energy source in aerobic metabolism.

To summarize: with the participation of a large number of electron carriers and the assist- ance of different enzyme complexes, 4 electrons are transferred to one O2  molecule.

But there is a possible danger at this point: when reduction is incomplete, i.e. only one electron is transferred to an O2molecule, superoxide radicals are formed as side-products, which in turn are kept under control by the superoxide dismutases, the Mn-SOD in the mitchondrial matrix and the Cu-Zn-SOD in the cytoplasm.

Functional disorder and erratic control can result in an excess of superoxide radicals and in a series of diseases principally caused by oxygen radicals.
In the regulation of the oxidant/antioxidant equilibrium, hydrogen peroxide, H2O2, assumes a
recognized signal function, as an uncharged molecule it is able to pass through the membranes unhindered; when formed in excess, however, it is able to damage the mitochondrial or the nuclear DNA comparable to superoxide radicals.

Table 2:
Pathological processes, induced by an excess of reactive oxygen species (ROS) such as superoxide radicals, H2O2 and OH radicals and / or an insufficient antioxidant system

Therapy methods able to reduce excess superoxide radicals, H2O2 and OH radicals are useful in these diseases, especially when applied in complementary form (Storz 2006). Here, systemically administered ozone ought to occupy a prominent position: in low doses, in the form of rectal O3/O2 insufflation or the reinfusion of externally treated blood, the intracellular antioxidative enzymes are significantly upregulated and activated. Apparently, the lipid peroxides formed with ozone here function as messenger substances, responsible for initiating this regulatory process.

From ozonolysis to “ozone peroxides” as second messenger molecule

In the meantime, quite a number of studies on the reactions of ozone in the whole blood are available; these mainly deal with the physiological sequel products and less with the under- lying specific reaction mechanisms of ozone. The dipolar character of the ozone molecule is the basis of the selective reaction behaviour with the isolated double bonds of unsaturated fatty acids, and in the first place, with sulfhydryl (SH-) groups. The classical form of 1-3- dipolar addition, ozonolysis (Criegee 1953) with isolated (not with polyunsaturated fatty acids
!) via instabile ozonides results in non-radical, peroxidic compounds such as, for example, the hydroxyhydroperoxides which, as lipoperoxides (LOPs), determine further reactive processes (Figures 3-4).

In a less aggressive way than superoxide radicals and H2O2, these „ozone peroxides“ are in a position to play the part of signal molecules and assume a second messenger function in upregulating antioxidants, resulting in an increase of superoxide dismutase, catalase, glucose-6-phosphate dehydrogenase, glutathion peroxidase, glutathion reductase etc. In this way, the biological system is equipped with an improved antioxidant capacity, with a higher oxidative stress tolerance, and is able to protect cells from an excess of reactive oxygen compounds and free radicals.

This mechanism might occupy the key position as regards the physiological effect of ozone in its different indications. 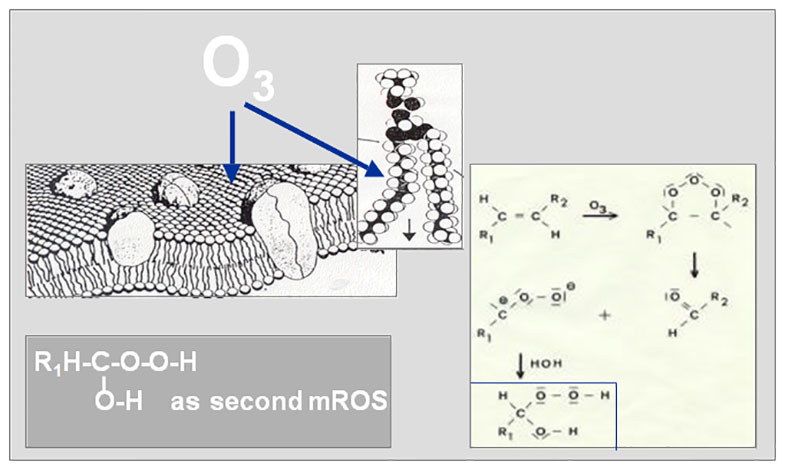 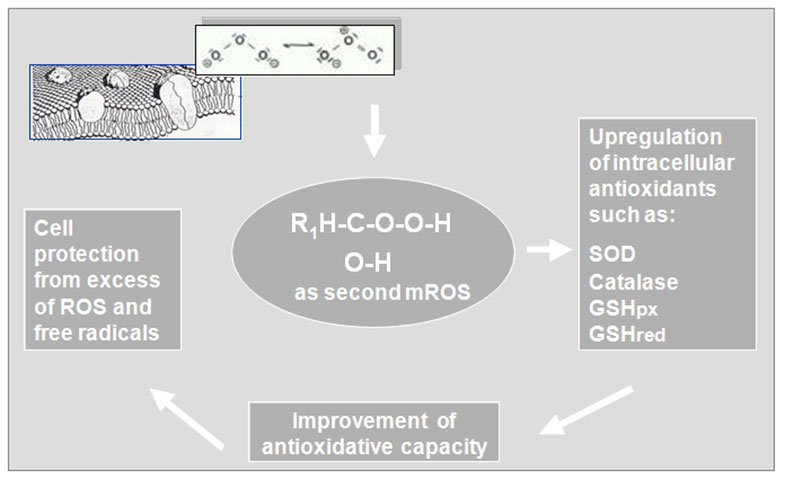 In a clinical study involving 160 diabetes type II patients, León, Menéndez et al. (2005) were able to obtain a significant increase in superoxide dismutase, catalase and glutathion peroxidase by ozone treatment in the form of rectal insufflation compared with an untreated control group and with a control treated with antibiotics (Figure 5). There was also a significant decrease in blood sugar values after 20 days of treatment; correspondingly, the size and extent of the diabetic gangrene are reduced, a fact known from a number of earlier studies (Werkmeister, Calderon) . 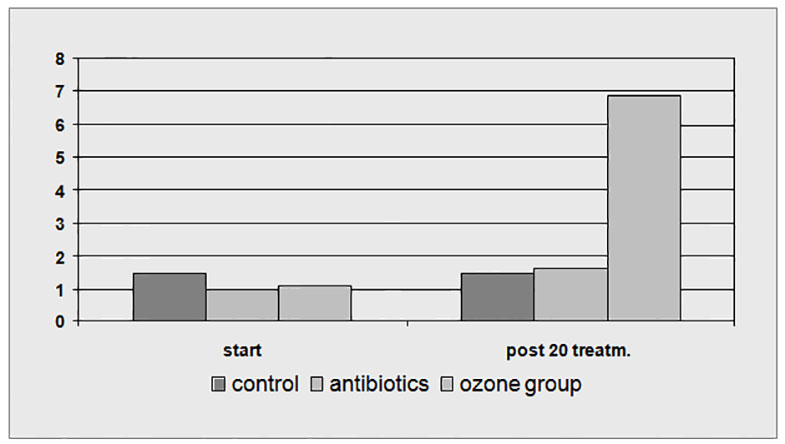 In a clinical study involving 160 diabetes type II patients, León, Menéndez et al. (2005) were able to obtain a significant increase in superoxide dismutase, catalase and glutathion peroxidase by ozone treatment in the form of rectal insufflation compared with an untreated control group and with a control treated with antibiotics (Figure 5). There was also a significant decrease in blood sugar values after 20 days of treatment; correspondingly, the size and extent of the diabetic gangrene are reduced, a fact known from a number of earlier studies (Werkmeister, Calderon) .

Insulin resistance and mitochondrial dysfunction of the ß cells are being discussed as major causes for diabetes type II. Here too, the dysfunction of the mitochondrial respiratory chain apparently results in an excess of superoxide radicals, which is made responsible for a deregulation of the glucose metabolism via the polyol-, hexosamine-, protein kinase-C- and the protein glycation path (Lowell, Shulman 2005; Brownlee 2001).

One of the pathological conditions, on which an initial study was already published by Riva in 1990, is age-related macular degeneration; here, the systemic administration of ozone in the form of major O3 autohaemotherapy resulted in an improvement of visual acuity. These results were confirmed by Bocci (1997, 2004) both by measurement of visus acuity and by determination of antioxidants in these patients with a significant increase of superoxide dismutase, catalase, glukose-6-phosphate-dehydrogenase and the enzymes of the gluta- thion system, see Figures 6 and 7.

Statistical values from 267 patients with age-related macular degeneration were presented by Smettan: an objective improvement could be obtained in 35.2 % of the patients, as verified by measurement of vision (Smettan 2005). 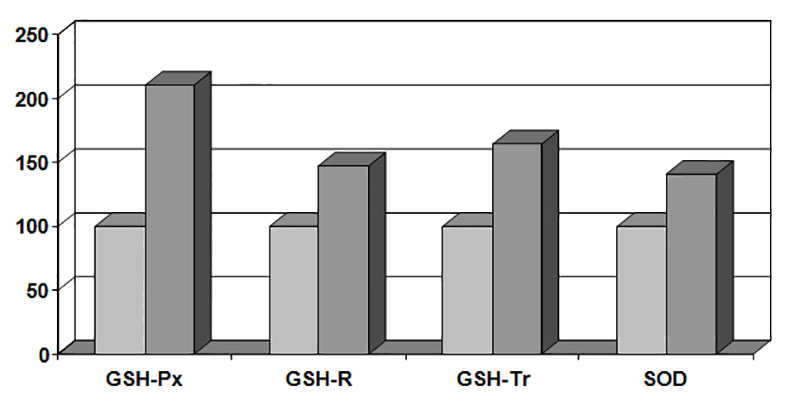 Figure 6: Activation of antioxidant enzymes after 15 treatments in the form of MAH, expressed in % of initial value (Bocci 2004). 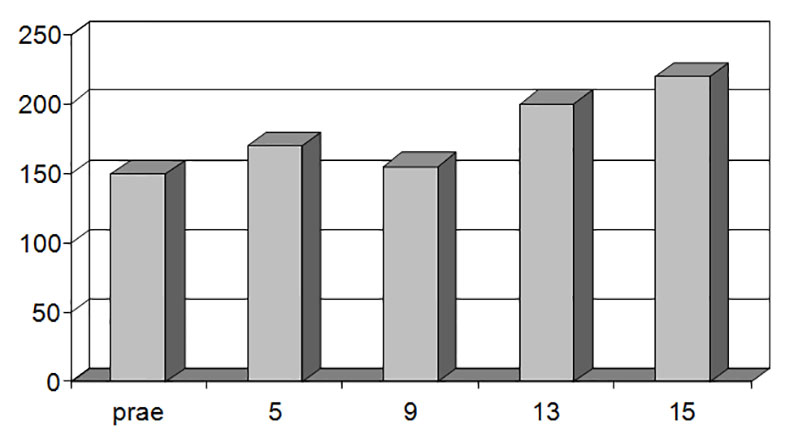 Figure 7: SOD in ng/ml in patients with age-related macular degeneration. Mean values for 8 patients during 15 treatments with  MAH (Bocci 2001).

Prevention in chemotherapy and radiation

Cell protection against free radicals is the rationale where ozone is to be applied systemically as  complementary  medication  in oncology, i.e.  to protect healthy cells and organs against damage from radiation or chemotherapy — as these methods are often limited by their toxic effect in liver and kidneys.

This has been confirmed in a study with animals using cisplatin as an example. Figure xy shows, with superoxide dismutase as leader enzyme, the influence of preventive ozone treatment via rectal insufflation as depending on different ozone concentrations. Interest- ingly, and in agreement with all empirical values, the low concentration of 20 µg/ml is the most effective, whereas the negative effects of ozone already become noticable from 50 and 70 µg/ml upwards. The serum creatinine values behave in a similar way: with ozone pre- treatment at 20 µg/ml and subsequent cisplatin medication, they practically correspond to those of the untreated control group; at 50 µg/ml, the values are already comparable with those of the animal group treated with cisplatin only (González, Borrego et al. 2004).

The advantage and importance of integrating ozone therapy in a complementary treatment concept is found in the practically selective protective effect of healthy cells and organs, as cancer cells by themselves are either not equipped or only with an insufficient antioxidant system.

Peralta and coworkers have demonstrated the activation of the organism’s own antioxidants and radical scavengers in animal models: ozone has a protective effect, making the animals almost completely resistent to reperfusion damage. Following daily treatments in the form of rectal insufflation for 10 days prior to the invasive procedure, it was possible to inhibit reperfusion damage in rats subject to hepatic ischaemic reperfusion.

The ozone-induced increase in SOD in the animals pretreated with ozone apparently protects them from damage from free radicals, superoxide and OH-radicals in particular; the production of H202 remained within the normal range as compared with the untreated animal group (I/R).

Reduced glutathion (GSH) is practically unchanged versus the control group, whereas the reperfusion damage in the untreated animals is concomitant with an approx. 50% reduction in GSH, meaning that cellular protection against oxidation is, for the most part, ineffective (Peralta et al. 1999). Accordingly, the preventive, systemic administration of ozone improves the antioxidative capacity of the organism, and reduces subsequent damage from free radicals. In addition, transaminase values are slightly increased, but to an insignificant extent when compared with those of the control group. Corresponding results have been described for the kidney by Calunga et al. 2001 using a reperfusion model involving rats verified by the histological results (Calunga et al. 2001, Ajamieh et al. 2004, 2005). Barakat could prove this protective effect from reperfusion damage on the myocard by intraperitoneal infiltration of ozone at low concentrations (Barakat 2006).

With the classical indications of ozone therapy such as angiopathia, diabetic angiopatia in particular, chronic hepatitis, chronic rheumatic diseases, metabolic dysfunctions as in type 2 diabetes, the pharmacological effect of ozone is  mainly  being  understood  by  the upregulation of the cellular antioxidants and its protective effect to healthy cells against reactive oxygen species and free radicals, and this a part of a complementary therapeutical concept.

Table 3 shows the ozone treatment concept as a preventive in chemotherapy as an exemple.

Listing6/6 of Mode of Action