Last years it came to an increase in the number of patients with severe forms of rosacea, in particular this disease quite often develops in young people. A certain negative role in the development of complications is taken by irrational external therapy, in particular long-lasting uncontrolled applications of external corticosteroid preparations. It is known that a certain role in the pathogenesis of rosacea is taken by the disturbed metabolism of vasoactive peptides such as bradykinin, serotonin, histamine [1], activation of the kallikrein-kinin system [2]. Nowadays, it is known the biochemical effects of a medical ozone-oxygen gas mixture such as influence of ozone therapy on the synthesis of predecessors of biogenic amines – tryptophan, histidine, tyrosine.

Previously we studied effectiveness of minor ozonated autohaemotherapy in the treatment of acnae vulgaris et conglobatae [3]. Medical ozone-oxygen mixture was used in the treatment of bacterial, viral and mycotic diseases. Microbiotic agents take part in the pathogenesis of the acne [4]. During 5 years (1992-1997) in the dermatological clinic of Nizhny Novgorod Medical Academy minor ozonated autohaemotherapy of acne and it’s influence on the immunity and pro- and antioxidative system indices were studied. It is known that disorders of lipid peroxidations take place in the pathogenesis of acne. The comparison of these data allowed us to develop a method of mesotherapy with ozone for treating complicated forms of rosacea and acne disease in the form of injections into/around the damaged areas with an ozone-oxygen gas mixture.

The group of acne patients concluded 13 patients (9 males and 4 females) in the age from 14 to 29 years (18 years on average). Average duration of disease was 4,5 years (from 1 to 10 years). After ozone therapy significant improvement was noted in 8 patients (60%) and clinical improvement – in

7 patients (40%). Our previous data showed higher effectiveness of minor ozonated autohaemotherapy in the treatment of acne disease (17% – disappearance of symptoms and 83% – significant improvement).

15 patients suffered from severe form of rosacea (7 male and 8 female persons) in the age from 20 to 60 years (average age – 48 years). Duration of rosacea skin rush ranged from 1 to 9 years (5 years on average). Demodex folliculorum was founded in 6 clinical cases. 2 females had syndrom of local steroids abolition with severe inflammation reaction, edema, pruritus. After treatment all patients demonstrated significant clinical improvement with regress of pustules and papules, intensity of erythema.

As a method of therapeutic action we used injections into/around the damaged areas of face skin with an ozone-oxygen gas mixture at different ozone concentrations: 3000 mcg/L, 5000 mcg/L and 10 000 mcg/L. The total quantity of an ozone-oxygen gas mixture introduced by means of micro- injections was not more than 15 cm3. The procedures were performed thrice a week for 4 weeks. The positive effect of this method is characterized by a decrease in face tissue swelling, regression of pustular eruptions. Our observations have shown a perspective of using ozone therapy in the form of micro-injections into the area of teleangiectasia with an ozone-oxygen gas mixture at ozone concentration 10 000 mcg/L in complicated forms of rosacea (photo 1, 2, 3, 4). Dynamics of clinical appearances was confirmed by studying some indices of lipid peroxidation and antioxidant system (diene conjugates (DC) of plasma and erythrocytes, malonic dialdehyde (MDA), glutathione reductase). Determination of diene conjugates (initial products of lipid peroxidation) was carried out by method of spectrophotometry at wave length α = 233 nm in heptane’s phase of heptane- isopropanol extracts of serum and blood erythrocytes according to Orekhovich’s method. Determination of malonic dialdehyde (intermediate product of lipid peroxidation) was carried out by

colorimetric method at an interval of wave length α = 535-580 nm in serum and hemolysates of erythrocytes after sedimentation of proteins by means of phosphoric-tungstic acid according to Gavrilov’s method.

The results of studying the indices of lipid peroxidation (diene conjugates and malonic dialdehyde) are presented in Table 1.

Table 1. Dynamics of lipid peroxidation indices under influence of ozone therapy in patients with complicated forms of rosacea and acne disease.

The present data have shown that the initial values of diene conjugates in plasma and erythrocytes insignificantly exceeded the control group values, in the course of ozone therapy it did not come to intensification in the production of initial products of lipid peroxidation. The values of malonic dialdehyde in plasma before the treatment were credibly lower than the control values, under influence of ozone therapy its level increased twice. The level of MDA in erythrocytes that was initially higher than the control one decreased in the course of ozone therapy, but did not reach the control group values. Thus, ozone therapy including local introduction of an ozone-oxygen gas mixture into the damaged areas exerts systemic influence on the prooxidant system indices and requires thorough laboratory control. For the purpose of its more complete performance it is advisable to supplement the given complex of biochemical indices with determination of superoxiddismutase and antioxidant plasma activity (by biochemiluminescence method) as the most informative index of the antioxidant system status. 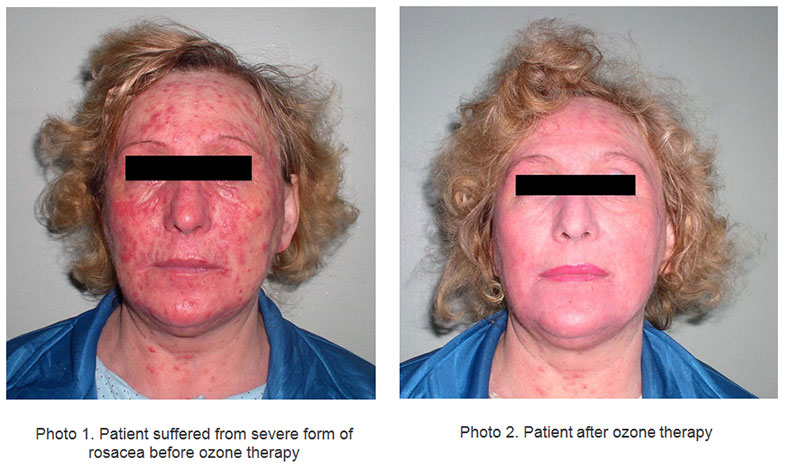 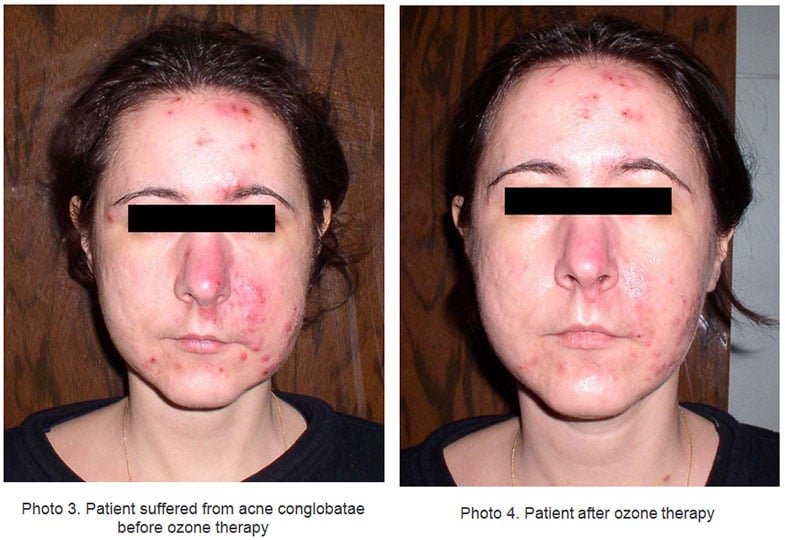 Local injections of ozone-oxygen mixtures are considered as a perspective method in the treatment of severe complications of acnae disease and rosacea and require thorough biochemical control.