We have studied the behavior of the erythrocyte glutathione antioxidant pathway, the HLA-DR molecule expression and the serum IgE level in patients suffering reactive asthma, whose were treated with ozone major autohemotherapy or rectal insufflation. A subgroup of patients having high levels of serum IgE (> 250 IU/mL) presented high level of HLA-DR expression (> 35 %) and lower concentrations of erythrocyte GSH (<
2.00 mol/g.Hb) and GPx (< 11.62 IU/g.Hb) as a basal state before the beginning of ozone therapy. GST and GR were in the normal range. After to complete 15 sessions of ozone autohemotherapy applications (dose of 8 mg each session), all parameters in the glutathione antioxidant pathway were highly elevated and, IgE and HLA-DR levels decreased markedly respect to the initial values. With ozone rectal insufflation (20 sessions at an ozone dose of 10 mg each one), similar results were achieved although the changes were not so significant as in authohemotherapy. When the analysis was done considering all patients (with or without initial high level of IgE) the changes in GSH, GPx and GST were sligthly higher after autohemotherapy without changes in GR and IgE, but HLA-DR expression significantly decreased. These findings support a role for IgE producing oxidative stress and inflammation in allergenic asthma. On the other hand, ozone therapy proved to be effective in this disease due, likely, to its regulation on glutathione antioxidant pathway which lead to a control in the oxidative stress present in the asthma patients and a change in the cytokine pattern.

Allergic asthma is characterized by airway hyperresponsiveness and airway inflammation. Population studies have shown that the majority of adults and children with well-documented asthma are atopic, and the prevalence of asthma is greater in subjects with high serum IgE levels in a close relation with inflammatory cells(1-3). Examination of bronchoalveolar lavage (BAL) fluid cells and supernatants from allergic asthmatics has revealed the existence of Th2-like cytokine patterns (4,5) together with the IgE elevation. The relative proportions of cells expressing Th2 cytokines [IL-4, IL-5, IL-6, IL-9 and IL-10] in BAL fluid or biopsies are increased in symptomatic compared with asymptomatic asthmatic individuals (6) and in allergic asthmatic patients after segmental allergen challenge (7,8), suggesting that Th2 cytokine release contributes to airflow obstruction. Th2 cytokines may contribute to allergic reactions and therefore may play an important role in the inflammatory reactions and airway hyperresponsiveness observed in allergic asthma.

On the other hand, bronchial epithelial cells appear to play an active role in asthma. They are spontaneously activated and release increased amounts of inflammatory mediators (9-11) and express higher levels of HLA-DR molecule (12,13), which have been implicated in the cellular network underlying inflammation in asthma.

Systemic ozone therapy has been proved to be effective in inducing the production of cytokines from blood mononuclear cells (14,15), and can stimulate the increase of cellular antioxidant system, including the glutathione antioxidant pathway, eventually inhibiting the oxidative stress (16-18). Thus, our aim is to explore the effects of ozone therapy in atopic asthma patients, and to have a look in the possible related mechanism.

Results are expressed as meanSD. Comparison of matched samples was done by Wilcoxon test. A p-value equal to or less than 0.05 was considered to be statistically significant.

Table I. Number of patients with high levels of serum IgE (> 250 IU/mL) plus/or high HLA-DR expression (> 35 %) in PBMC for the different groups of treatment

We have established a high cut off level of 250 IU/mL, while for other authors the cut off level is between 121 and 150 IU/mL (23-25). This could be the reason why in our study many patients are in the normal group because they have values under to our cut off level but above that reported by others, as can be seen in table II.

In the case of HLA-DR expression in PBMC, a similar fact occurs. HLA-DR reference range is under 25 %, however, we established a cut off level of 35 % to high level of expression, which was not achieved by all patients. Nonetheless, when we examined the HLA-DR values considering all patients in each kind of treatment, all figures were above the reference range (Table II). Both IgE and HLA-DR cut off levels were established so high in order to be sure that the subgroup of patients that have both parameters high are real atopic asthmatic patients.

Table II. Values of serum IgE and HLA-DR expression in PBMC before ozone therapy application taking into account all patients.

MAHT at a dose of 4 mg produced a non-statistically significant slight decrease in IgE level and HLA-DR expression. However, MAHT at a dosage of 8 mg and RI at 10 mg induced a deep decrease in both parameters (Figs. I and II). The effect from MHAT at 8 mg was higher than that from RI at 10 mg. 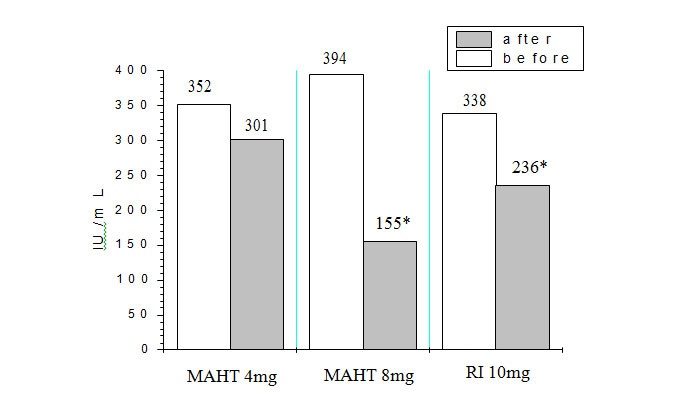 Figure 1. Ig values before and after ozone therapy in the subgroup of patients with high level of serum IgE in PBMC plus high HLA-DR expression.

Figure 2. HLA-DR values before and after ozone therapy in the subgroup of patients with high level of serum IgE plus high HLA-DR expression.

It has been suggested that reactive oxygen species (ROS) play an important role in the pathogenesis of airway inflammatory diseases (26,27). In asthma patients, a correlation has been found between the degree of bronchial responsiveness to methacholine and the production of superoxide anion by peripheral polymorphonuclear leukocytes (28,29). Katsumata et al. reported that ROS could induce bronchoconstriction and airway hyperresponsiveness in anesthetized cats (30). On the other hand, Glutathione and antioxidants enzymes have been found to protect the lung against ROS toxicity (31,32). These findings demonstrate that ROS exert a direct effect in mediating bronchial responsiveness and asthma. Because ozone therapy has the property to regulate the oxidative stress caused by ROS (16-18), our aim was to know if there is some relationship between asthma immunological mediators and antioxidant defense systems. One of these antioxidant defense systems is the glutathione antioxidant pathway, which includes the enzymes GPx, GST and GR. The measurement of these parameters in the subgroup of patients of high serum IgE concentration plus high HLA-DR expression in PBMC gave the values that is showed in table III. As can be seen, MAHT at a dose of 4 mg induced a significant increase in GPx enzyme activity (approximately 130 %), with no increase in the other parameters, after the treatment with ozone therapy. MAHT at a dose of 8 mg influenced positively all the components of the glutathione antioxidant pathway; being the major increase in the GPx enzyme (approximately at 190 %), followed by GST enzyme (approximately at 170 %), GSH (approximately at 160 %), and finally GR enzyme (approximately at 140 %). RI at a dose of 10 mg produced an enhancement in GPx and GST enzymes (approximately 140 % for both).

Table III. Glutathione antioxidant pathway values before and after ozone therapy in the subgroup of patients with high level of IgE plus High HLA-DR expression.

Ozone therapy produced a contrary response in the glutathione pathway components to that seen in IgE and HLA-DR. It is evident MAHT at ozone dose of 8 mg induced the most powerful response in stimulating the glutathione antioxidant pathway; followed by the response induced by RI at ozone dose of 10 mg. MAHT at 4 mg produced a mild response. Comparison of this behavior with that seen for IgE and HLA-DR responses in each kind of treatment demonstrates that all are similar. Thus,  we assumed there was a close relationship between the asthma immunological mediators and the antioxidant system in this subgroup of patients.

In order to examine how was the behavior when considering our complete population sample, we analyzed the data exhibited in the following figures and table.

Figure 3 and 4 present the results for IgE and HLA-DR, respectively. MAHT at ozone concentration of 4 mg and RI at 10 mg brought about no change in serum IgE. A slight no significant decrease of IgE level was observed when we used MAHT at ozone dose of 8 mg. HLA-DR values were diminished statistically in the MAHT at 8 mg, but with the other two kind of treatments they had a gentle no significant reduction. One of the conclusions we could extract is that patients in the former subgroup (high IgE plus high HLA-DR) are higher responders to the ozone therapy than the another one. The second conclusion to underline is that there was in each parameter a response with lower degree that observed in the former patient subgroup. 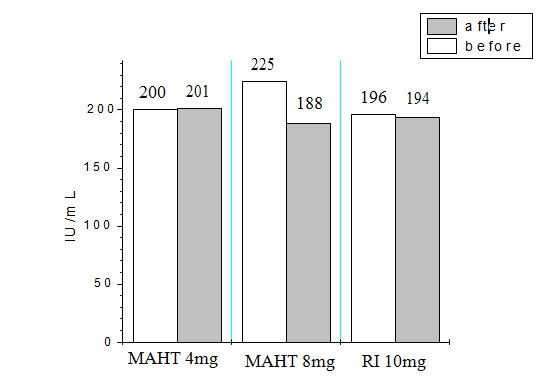 Figure 3. IgE values before and after ozone therapy considering the results from all patients. 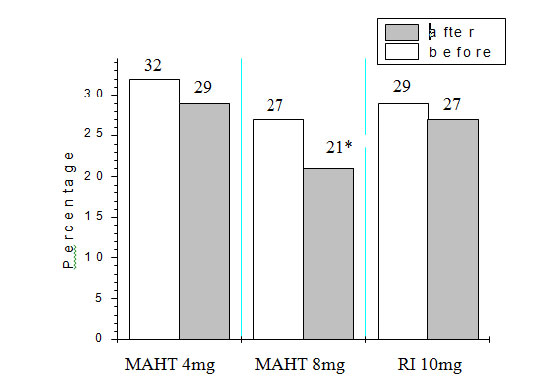 Figure 4. HLA-DR values before and after ozone therapy considering the results from all patients.

The data for the glutathione antioxidant pathway from all patients are showed in the table IV. GSH was slightly increased in patients with MAHT at 4 mg. GPX and GST activities were induced in those patients receiving MAHT at 8 mg. With RI at 10 mg the induction was in GST activity. Here, it was also observed a lower response for each parameter than that observed from the former patient subgroup.

In spite of the lower response in each measured parameters, the response-behavior of the immunological mediators and the glutahione antioxidant pathway was analogous like that in the before subgroup.

Table IV. Glutathione antioxidant pathway values before and after ozone therapy considering the results from all patients.

In a previous paper we have demonstrated MAHT at 8 mg induces a significant reduction in serum IgE and HLA-DR expression in PBMC, together with a modulation in CD3+, CD4+ and CD8+ lymphocyte subpopulations (33). In the present work we found similar results for IgE and HLA-DR using MAHT at an ozone dose of 8 mg and RI at an ozone dose of 10 mg. From the clinical point of view symptoms were reduced in the 89 % of the patients. The present results corroborate the beneficial effects of ozone therapy in asthma patients.

We have found glutathione antioxidant components responded in close inverse relationship with the bronchial hyperresponsiveness biomarker [IgE](3) and airway inflammation biomarker [HLA-DR](13) after ozone therapy application in atopic asthma patients. From these results we can assume ozone therapy influenced positively the synthesis and release of cytokines (14,15) in such away that a change from Th2 to Th1 [IL-2, IFNg] pattern occurs, reducing the production of asthma mediators [IgE, HLA-DR, etc]. Changes from Th2 to Th1 cytokine pattern have been demonstrated to counteract the airway hyperrsponsiveness and bronchial inflammation (34). It is important to remark that ozone dose is a fundamental point for cytokine release. Our results were better with the dose of 8 mg of ozone in each treatment session. This dose is corresponding to a concentration of 40 mg/mL. Cytokine release from ozone therapy has been reported by Bocci et al. (35,36) to occur from 42 to 78 mg/mL concentration range. At 20 mg/mL (dose of 4 mg) the cytokine release is insignificant (35). Additionally, our findings on glutathione antioxidant pathway suggest ozone therapy up regulated the antioxidant defense system counteracting the oxidative stress produced from the inflammatory mediators.

These results corroborate the outstanding role of IgE for producing oxidative stress and inflammation in allergenic asthma. Combination of the expressed actions may be the possible mechanism by which ozone therapy has its beneficial effect on asthmatic patients. However, an experimental evidence of cytokine type released after ozone therapy application, is needed. This will be our next objective.