The clinical practice of using carbon dioxide therapy for localized adiposities was audited over a 4-year period.

Patients receiving physical, dietary, or drug concurrent therapy were excluded from the audit. Original measurements in terms of mean ± standard error of the mean (SEM) were compared with those obtained after five sessions.

These results agree with those reported originally and demonstrate that carboxytherapy is safe and effective.

Keywords: Audit · Carbon dioxide · Cellulite · Localized adiposity
Carbon dioxide (CO2) therapy or carboxytherapy is the transcutaneous administration of CO2 for therapeutic purposes. Since Brandi et al. [1] described the efficacy of CO2 in treating localized adiposities, showing measurable reductions in maximum circumferences of the abdomen, thigh, and knee regions, there has been a worldwide interest in the treatment [2, 3]. In the same paper, Brandi et al. [1] provided histologic evidence for the effects of CO2 gas infiltration on subdermal adipose tissue. Brandi et al. [4] subsequently reported improved skin elasticity when carboxytherapy was performed for skin irregularity after liposuction.

In this report we describe an audit of the results after carboxytherapy for the treatment of cellulite over a 4-year period (March 2004–2008) in our clinic.
Patients and Methods

The inclusion criteria for the study specified patients undergoing a minimum of five carboxytherapy sessions at 1- to 2-week intervals who were not under special dietary restrictions, not taking diet pills, and not undergoing other body-contouring therapy such as endermologie [5]. Con- traindications to participation in the study included phlebitis; significant cardiac, respiratory, renal, or hepatic impairment; uncontrolled hypertension; and pregnancy. Some patients treated for abdominal fat reduction under- went ultrasound examination to document the presence of subepidermal cellulite.

Carbon dioxide was infused subcutaneously into the affected areas using the Carbomed Programmable Automatic Carbon Dioxide Therapy apparatus (Carbossiterapia Italiana  S.R.L,  Via  Zanella,  MI,  Italy)  and  30 gauge, 0.3 9 13-microlance needles (Fig. 1). The depth of infusion was 10 to 13 mm. The device, calibrated to measure the dosage in milliliters, regulated the flow rate and the infusion pressure. The infusion was administered at a velocity of 50 to 100 ml/min, and the total quantity of CO2 infused was 500 to 1,000 ml for the abdomen and 800 to 1,000 ml for each thigh over a 20- to 30-min period. The therapy was continuously monitored by qualified medical personnel. 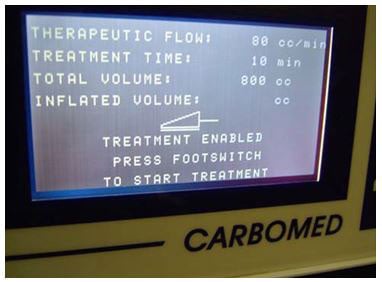 The level of the thigh circumference measurement was recorded as the distance from the anterior superior iliac spine, and subsequent measurements were taken from the same level for each patient.

The patients were grouped according to age (20- to 29-year-old group, 30- to 39-year-old group, and 40- to 50-year-old group), sex, and type of therapy. Measurements at baseline and 2 weeks after the fifth carbon dioxide therapy session were compared in terms of mean ± standard error of the mean (SEM) using Student’s t test. Significance was set at a p value less than 0.05.

The complications were minor and included pain at the injection site as well as crepitus and minor aches, which did not last more than 30 min. Some needle-entry bruising was noted, which resolved within 7 to 10 days. No other side effects were observed.

a Values are mean ± standard deviation

a Values are mean ± standard deviation

The women experienced a significant reduction in abdominal and thigh circumference. This was not reflected in the male group, probably because of the group was small (n = 10). The magnitude of the reduction (*2 cm) was similar to that originally reported by Brandi et al. [1] in their prospective study of 48 women (all had thigh therapy and 14 also had abdominal treatment) who underwent carboxytherapy using the same equipment as in the current series. This comparison is valid because we also excluded all patients receiving concurrent drug or dietary treatment to avoid any confounding factors.

Weight loss is not the primary objective of carboxy-therapy, which is aimed at treating localized adiposities and improving skin texture.  However,  women  30  to 50 years of age reported a small (*1 kg) but significant weight loss after abdominal or thigh carboxytherapy. This supports the hypothesis that the site of CO2 action is restricted to localized tissue [1,6].

No serious complications from carboxytherapy have been reported, as evidenced in this audit. This is hardly surprising because CO2 is widely used in medicine as the mainstay of minimally invasive surgery. During laparoscopic procedures, CO2 is routinely used inside body cavities to provide a superb view and access for the ever- growing list of surgical procedures. Hypercapnia, which Fig. 2 Ultrasound examination of the abdomen showing measurement of subcutaneous fat before (a) and after (b) carbon dioxide (CO2) therapy. 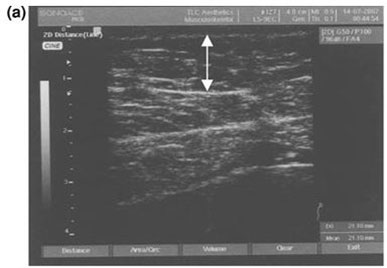 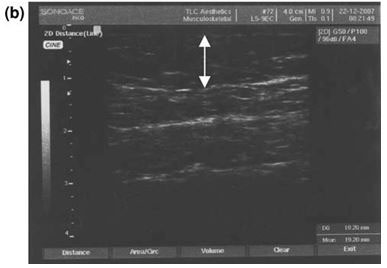 Subepidermal thickness is reduced after carboxytherapy incidentally does not occur during carboxytherapy [7], is very well tolerated. The equipment used in this study is manufactured in Italy and approved by the European Community (EC) for medical use.

Sound physiologic principles underlie the possible mech- anisms of CO2 action, modulating its effects on the skin and subdermal layers. In a histologic study, Brandi et al. [1] reported fracturing of the adipose tissue with release of triglycerides in the intercellular spaces and adipocytes presenting thin fracture lines in the plasma membrane. These lines did not involve the connective spaces where the major vascular structures are located. The dermis presented a thicker appearance than before the treatment, with the collagen fibers distributed more diffusely.

The same authors reported microcirculatory changes after CO2 therapy, reflected by increased perfusion as measured by laser Doppler flowmetry and increased oxygen tension as measured by transcutaneous oxygen tension. This is to be expected from the Bohr effect on the oxygen dissociation curve. Ferreira et al. [6], in a blind, interventional, cross- sectional study, investigated CO2 injection in the dermis of Wistar rats. Treated rats showed intense collagen turnover in their skin samples compared with control animals, which had saline injections. These findings support the subjective clinical findings of improved skin texture after CO2 therapy.

Obesity is associated with decreased self-esteem and increased risk of diabetes and cardiovascular complications such as hypertension and ischemic heart disease. In a recent metaanalysis of 10 studies [8], the waist-to-height ratio, an index of abdominal obesity, was found to be a better discriminator of cardiovascular risk than body mass index (BMI). Besides liposuction, the direct therapeutic options for dealing with abdominal fat are few. Based on our results, carboxytherapy, singly or in combination, is definitely useful in this context.

One of the main problems of applying evidence-based medicine to aesthetics is that the benefits are subjective and difficult to quantify. Carboxytherapy is no exception because the main attraction of this treatment is improvement in skin texture and elasticity [1, 2]. Brandi et al. [4] reported improved skin elasticity after carboxytherapy, as measured by the Cutometer SEM 474 Courage-Khazaka (CK Electronics, Koln, Germany) [9–11]. This finding has been confirmed by the recent development of an animal model whereby increased collagen turnover was demonstrated histologically [6].

Our data show the benefits of carboxytherapy to be limited for men. Although this can be explained by the lack of sufficient male patients (n = 10), sexual dimorphism in the subdermal connective tissue is well documented [1]. This consists of a different orientation in the sexes of the sub- cutaneous fibers, which extend from the dermis to the fascia, probably linked to hormonal causes [12–14]. Younger women (age, 20–29 years) appear to derive less objective benefit from carboxytherapy. This supports the view that cellulite increases with age and hence the benefits of carbon dioxide therapy are more quantifiable.

Consumer satisfaction is reflected in the widespread acceptance of carboxytherapy worldwide [2, 3]. Clearly, patients who enroll in wellness programs receive thorough counseling. In our practice, patients undergo basic health screening, and most patients receive concurrent dietary, lifestyle, and exercise therapies. As part of a holistic  approach, CO2 and drug treatment may be added. An audit of CO2 therapy should exclude the majority of patients who enroll in a holistic program. Difficulty restricting mono- therapy in clinical practice probably explains why pub- lished audits of this popular treatment are few. Conversely, it is likely that this audit may underestimate the results because physical, drug, or dietary methods are excluded.

The results of this audit agree with those reported in smaller prospective series, confirming that carboxytherapy is safe and effective.

Acknowledgment We are grateful to the clinic staff for their help in retrieving the data.

Open Access This article is distributed under the terms of the Creative Commons Attribution Noncommercial License which per- mits any noncommercial use, distribution, and reproduction in any medium, provided the original author(s) and source are credited.

Listing1/1 of CO2 and Cellulite