Non-pharmacological methods of treatment of skin diseases become more and more popular, and ozone therapy is one of the most actual of them. The paper reports an investigation of the effects of ozone therapy on various pathogenic factors of eczema (E) and analyses differences between modes of ozone-oxygen gas mixture application in patients with E. Our interest of seeking new ways in treating E. is based on the fact that E. is one of the most common skin diseases; patients suffering from E. usually show hypersensitivity to various chemical agents, including medications. Due to this they can exhibit perverted reaction to pharmacological treatment, primarily by exacerbation of inflammatory skin lesions and itch. That is why; we concentrated our efforts on various methods of non- pharmacological treatment in patients with E.

Unlike the majority of our colleagues we prefer to consider non-pharmacological treatment of various skin diseases to be not subsidiary one, but equal in rights with the other methods and sometimes (in case of allergy) the only possible to be applied. We have a rule to predict some physiotherapeutic treatment for any of our patient with skin disease, especially for those with inflammatory dermatosis. E. is supposed to be a poly etiological inflammatory dermatosis, mainly of neuro- allergic genesis. Some dermatologists prefer to consider E. to be an intermediate condition between acute allergic dermatitis and atopic dermatitis Sometimes the term “eczematous dermatitis” is used; it refers to the group of skin disorders with similar histologic and clinical changes. That is why, seeking of new ways of non-pharmacological treatment of E. was interesting for this disease itself and, from the other hand, and E. was a kind of model of the very wide range of skin inflammatory diseases.

Ozone-oxygen treatment (ozone therapy) draws our attention, because other methods have rather long list of limitations – the majority of them cannot be applied in the acute phase of any dermatosis with oozing. Heart diseases, tumors, pregnancy also limit the majority of traditional methods of non-pharmacological treatment.

Applying ozone therapy in patients with E. we took into account ozone influence on the principle pathogenetic factors of E., such as imbalanced lipid peroxidation (LPO) and antioxidative activity (AOA), which results, in particular, in abnormal blood vessels’ permeability and microcirculatory dysfunctions.

We applied ozone therapy in treatment of 108 patients suffering from various types of E. Among our patients there was almost equal amount of men and women (40 % and 60 % correspondingly); age of the majority of them did not exceed 60 years.

In order to investigate the state of the LPO and AOA in blood serum of these patients we used chemiluminiscence technique. This method is based on the evaluation of the intensity of luminescence, induced in the blood sample with Fe2SO4 and which is normally caused by LPO. Analysis of blood serum in patients with E. demonstrated the imbalance between LPO and AOA. Studies revealed drastic intensification of LPO in the majority of the patients, which coincided with the reduction of AOA. Another reason to use the induced luminescence was to control safety and efficiency of ozone therapy.

Taking in consideration, that the imbalanced LPO processed results, in particular, in microcirculatory disorders, another way to control the ozone therapy efficiency was the investigation of the skin microcirculatory function. We used LASER Doppler computerised flow-metering system to control the function of blood microvessels both in the area of skin lesion and on the intact skin. It was found that clinical manifestations of E. are accompanied by dramatic changes of microcirculatory functions. Value of the microcirculatory index (MI), which is defined as product of the amount of erythrocytes in skin capillaries and average speed of their flow, was increased almost 4 times in comparison with normal values. It reveals so called hyperemic type of blood dynamics and corresponds to the intensity of inflammatory changes of the skin. In the same time, the decrease of the microcirculatory efficiency was found. It manifested in the diminishing of the microcirculatory efficiency index (MEI), which is defined as ratio between active components of blood microvessels motions (capillary own independent motions) and passive motions of blood vessels, which are caused by respiratory movements of the chest and heart contractions. In patients with E. MEI was decreased almost twice in comparison with normal values. Moreover, this index was decreased both within skin lesions and in the intact skin, which testified the universal character of microcirculatory disorders.

After ozone therapy was finished (course of treatment lasted in the mean 15-20 days), clinical manifestation of E. (itch, oozing, skin hyperemia) reduced in great extent. In the majority of patients (almost 90%) we reported clinical remission or significant improvement of the disease. LPO and AOA normalized and remained stable during 3-6 months after the finishing of ozone therapy in majority of patients (67%); this corresponded to the stable clinical remission. Ozone therapy also resulted in the reliable improvement of the microcirculatory efficiency – MI decreased and reached normal values in patients who obtained systemicand combined ozone therapy and decreased twice in patients who obtained local ozone therapy. MEI increased and reached normal values in all groups of patients. 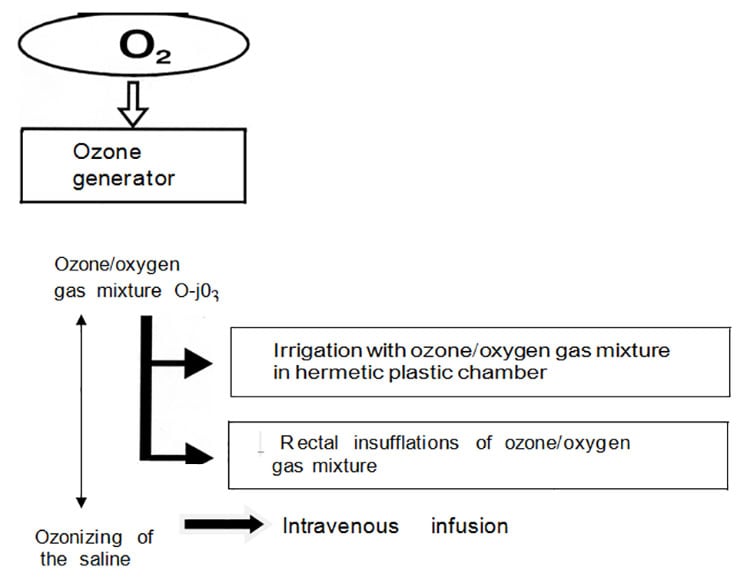 Fig. 1. Production of the ozone/oxygen gas mixture and modes of its application in treatment patients with eczema.

During ozone therapy we did not observe any side effects and changes for the worse in all the patients. We did not find any difference between the effect of intravenous infusions of the ozonized saline and rectalinsufflations of the ozone-oxygen gas mixture, while the last one method of ozone application seems to be more fast and convenient and allows to avoid contact with blood. It is important to note, that all the patients expressed enthusiasm concerning application of non-pharmacological method of treatment which is effective and based on natural compounds of the surroundings. Of course, in some cases of E. ozone therapy may be less effective, and administration of antibiotics and corticosteroids should be obligate, but in case of allergy, previous long treatment with various medications without appreciable effect ozone therapy may turn to be the only effective treatment without any strict limitations.

Thereby, we report the positive effect of ozone therapy in 90% of the patients with different types of E. and, what is even more important, stable remission of clinical symptoms of E. during the 3-6 months after the ozone therapy. Various modes of ozone therapy both local and systemic are simple and convenient and can be recommended both in hospital and in out-patient practice.